In this blog, I will cover some of the standardization effort that is happening in the Containers area. I will cover some history, current status and also mention how the future looks like. In the next blog, we will look inside ACI and OCI Container images.

Lot of developments in Container area are done as Open source projects. That still does not automatically mean that these projects will become standards. Following are the areas where Container standardization is important:

Having common Container standards would allow things like this:

The APPC specification started in December 2014 is primarily driven by CoreOS along with a few other community members like Google, Redhat. Rkt, Kurma, and Jetpack are examples of Container runtime implementing APPC. APPC defines Container image format, runtime, signing and discovery.

App container executor(ACE) defines how to run Container image and it contains the following:

OCI is the Open Container Initiative open source project started in April 2015 by
Docker and has members from all major companies including Docker and CoreOS. Runc is an implementation of OCI. OCI started off with Container runtime standard, but now it is also developing image format standard.

Initially APPC was developed by CoreOS and few other community members. Then OCI was developed by Docker, CoreOS and majority of Container community. It initially looked like there was lot of overlap between the two. The initial focus of OCI was around Container runtime, so it looked like APPC will continue to define other Container aspects like image format and discovery. Based on the recent OCI image format announcement, OCI is adding a common image format combining Docker and APPC image formats. In future, it looks like APPC and OCI will converge and OCI will cover all Container image related standards including image format, runtime, discovery, digest and signing. This is certainly a very good thing for the Container industry. 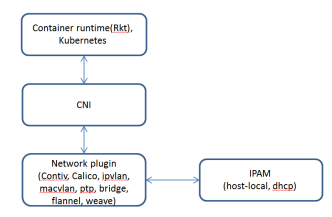 Following are some details on CNI:

Following are sample CNI configuration files that is used by CNI to setup the Container networking:

This sets up bridge network with host-local IPAM.

This sets up Flannel network. IP address management is done by Flannel itself.

This sets up ipvlan network with IP addresses allotted by dhcp.

Libnetwork is an open source project started by Docker and a few other community
members to deliver a robust Container Network Model. Following are some objectives: 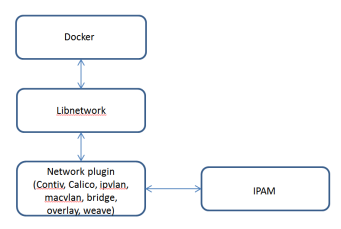 There are three primary components in Libnetwork:

Both Libnetwork and CNI have similar objective of creating extensible Container networking model. It looks like Libnetwork and CNI will both exist for different use-cases. Since the internal design is different between these two approaches, it will be difficult for them to converge. Docker uses Libnetwork and CoreOS uses CNI. Kubernetes has decided to use CNI and they have explained their reasons in this blog. Networking plugins like Weave and Calico will work with both CNI and Libnetwork and some plugins like Flannel work only with CNI standard.

Some folks feel that Standards stifles innovation and differentiation. I feel that as long as standards leave enough scope for implementation differences and different use cases, it actually helps in reusing common technologies and which in turn helps in faster innovation. Standards need to be supported by running implementations around the same time which encourages faster adoption. Its a great thing that Container standards are taking shape with working implementations.