For folks who want to get started with Docker, there is the initial hurdle of installing Docker. Even though Docker has made it extremely simple to install Docker on different OS like Linux, Windows and Mac, the installation step prevents folks from getting started with Docker. With Play with Docker, that problem also goes away. Play with Docker provides a web based interface to create multiple Docker hosts and be able to run Containers. This project is started by Docker captain Marcos Nils and is an open source project. Users can run regular containers or build Swarm cluster between the Docker hosts and create container services on the Swarm cluster. The application can also be installed in the local machine. This project got me interested in trying to understand the internals of the Docker host used within the application. I understood that Docker hosts are implemented as Docker in Docker(Dind) containers. In this blog, I have tried to cover some details on Dind and Play with Docker.

Docker in Docker(Dind) allows Docker engine to run as a Container inside Docker. This link is the official repository for Dind. When there is a new Docker version released, corresponding Dind version also gets released. This link from Jerome is an excellent reference on Docker in Docker that explains issues with Dind, cases where Dind can be used and cases where Dind should not be used.

Following are the two primary scenarios where Dind can be needed:

I have Docker 1.13RC version as shown below:

Lets start Dind Container. Its needed to run this in privileged mode since its mounts system files from host system.

We can look at Docker version inside Dind:

Even though host machine is running Docker 1.13RC version, we can test Docker 1.8.3 inside the Container using above example.

For Continuous integration(CI) use cases, it is needed to build Containers from CI system. In case of Jenkins, it is needed to build Docker containers from Jenkins master or Jenkins slave. Jenkins master or slave run as Container themselves. For this scenario, it is not needed to have Docker engine running within Jenkins Container. It is needed to have Docker client in Jenkins container and use Docker engine from host machine. This can be achieved by mounting “/var/run/docker.sock” from host machine.

Following is an example of Jenkins Container that mounts /var/run/docker.sock from host machine.

The application is hosted in public cloud and can be accessed as SaaS service using the following link. The application can also be run in the local machine. Following are some capabilities that I have tried:

Following is a screenshot of the application hosted in public cloud where I have created a 5 node Swarm cluster with 2 masters and 3 slaves.

To create a 5 node cluster, the typical approach would be to use 5 different hosts or VMs which is a huge burden on resources. Using
Play with Docker”, we create 5 node cluster with 5 Dind containers. For non-production testing scenarios, this saves lot of resources.

Following are some limitations in the SaaS version:

The service can either be accessed from Dind host using curl or by tunneling the application using ngrok and accessing using internet.
Following is an example of exposing the service to outside world using ngrok:

This will return an URL which can be accessed from internet to access the nginx service that we started earlier.

“Play with Docker” can also be installed in local machine. The advantage here is that we can tweak the application according to our need. For example, we can install custom Docker version, increase the number of Docker hosts, keep the sessions always up etc.

Following are some internals on the application:

Following picture shows the container hierarchy for this application. 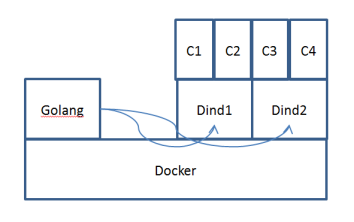 To install “Play with Docker” in my localhost, I followed the steps below:

My localhost is Ubuntu 14.04 VM running inside Windows machine.

Following is the 2 node Swarm cluster I created:

Following are some problems I faced with local installation:

I did not face the above 2 problems when I accessed the application as SaaS.

Thanks to Marcos Nils for helping me with few issues faced during my local installation.

8 thoughts on “Docker in Docker and play-with-docker”